Registration is still open for those wishing to take part in the famous Vredestein to Paris 20km race, which will begin its 44th edition on 9 October.

A great back-to-school race, the Vredestein 20 km in Paris will take place this year on Sunday, October 9, with the theme of space. And various solutions are proposed: to those who would like to run these 20 km face to face and to those who could not be present.

In fact, since the health crisis, remote participation has been launched. From now on, it is possible to keep the 2 modes of practice: the “historical” in-person version and the connected version to allow runners from all over the world who cannot pass under the Eiffel Tower to share the 20 km of Vredestein . Paris experience”.

Three connected races of 5km, 10km and 15km will also be organized for all registrants as part of the physical preparation for the Vredestein Paris 20km. A non-mandatory “accompanying” but which allows runners to set “intermediate and progressive goals”.

As for the course, it remains unchanged. The start will be at the Pont d’Iéna, at the bottom of the Trocadéro (16th), for an expected arrival at the foot of the Eiffel Tower (7th). In the meantime, the runners will have taken the direction of the Arc de Triomphe, they will have made a lap in the Bois de Boulogne, before meeting at the docks of the Seine, right bank and left bank. 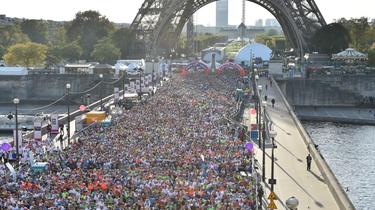 “The most beautiful classic race in Paris with its historical monuments”, congratulate the organizers, who list the “20 orchestras along the route”, the “starts in waves for an ideal fluidity” and the “mythical arrival at the foot of the Eiffel Tower”. “.